Sheffield Wednesday: Daniel Mann believes that the atmosphere around the club has impacted everybody | thisisfutbol.com

Sheffield Wednesday: Daniel Mann believes that the atmosphere around the club has impacted everybody

Sky Sports commentator Daniel Mann has been speaking on the latest edition of Sky Sports’ EFL Podcast about Sheffield Wednesday’s relegation battle and other news from the Championship, League One, and League Two.

The Owls have won just 12 matches all season but have managed to take their survival battle to the last day of the season, where a win against Derby County could keep them up.

However, if you look at Wednesday’s squad, they have the likes of Barry Bannan, Jordan Rhodes, Kieren Westwood, and Adam Reach, all of whom are experienced Championship players, but for whatever reason, the players have not delivered.

There are problems off the field with payments for players being delayed, and Mann thinks that this overall atmosphere has contributed to the disastrous season that they have endured.

He said: (11:50) “So it’s very concerning. Obviously, you’ve had the off the field roots of a lot of this trouble, and you know the club has not covered itself in glory in a lot of respects, and that’s understating it massively.

“That just seems to have seeped into the psyche of everybody. I mean, they do have some quality players; there’s no doubt about that, but they’ve just been dragged down, I think, with the whole direction the club has been going in.”

Do you think that the players have been impacted by the atmosphere around the club?

Yes, how could they not be

No, they have just played badly 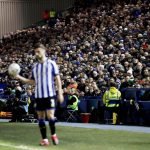 The fact that players have had uncertainty over their wages can’t have helped the situation, and the club were hit with a six-point deduction earlier in the season as well.

So, there have been some huge problems off the field as well as on it for Wednesday, and now it all comes down to a final day encounter with Derby.

You would think that if they were to go down, the problems off the field would surely only get worse, so this is a huge football match for the Owls.