A lot of Leeds United fans have taken to Twitter to voice their thoughts on the latest video to emerge regarding Kalvin Phillips and his injury concern.

The 25-year-old midfielder suffered a shoulder injury in the dying minutes of their final game of the 2020/21 campaign on Sunday.

Will Phillips be selected for the 26-man England squad? 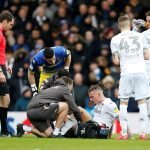 In an update from the club, it was said he is expected to be fit enough to play in this summer’s Euros and since the update, he has been called up to England’s provisional 33-man squad.

A video has emerged on the official Leeds United Instagram account that showed the England midfielder working on his recovery in the gym and it was shared on Twitter by an excited fan.

Leeds fans flocked to the tweet and it was apparent they were delighted to see the 25-year-old already working on his recovery after Sunday’s 3-1 victory over West Brom.

“Our Kalvin is just built different”

@NickRXXII
“Thank god. We have half a chance now”
@17LUFC
“Confirmation football is coming home, love to see it.”
@Kylejohnson89
“Buzzing to see this, i was gutted for the lad”
@L33W1919
“Made my day this”
@RyanSawyer94
“I wish Rob Price would take a look at my shoulder. Man is a miracle worker.”
@RiotBadger

Going by the reaction of these Leeds fans, it seems they are hopeful of their midfielder being fit enough to be involved in the shortened England squad this summer – if he is selected.

In other news: ‘Don’t spoil my day’, ‘Thanks for all the bad news’ – Many Leeds fans react as update emerges