Leeds United fans on Twitter have been responding to the latest comments made by England manager Gareth Southgate.

This comes after Leeds journalist Adam Pope shared a post on his Twitter page relaying comments made by Southgate concerning his decision to leave Whites striker Patrick Bamford out of the provisional 33-man squad for the upcoming European Championships.

On his decision to not include Bamford in this latest provisional squad, Southgate said that he “didn’t see any reason to change the players” in the striker position that were included in the World Cup Qualifiers in March, despite saying that Bamford has had a “very good” season with Marcelo Bielsa’s side.

This post then quickly grabbed the attention of a lot of Leeds fans who were not shy in sharing their thoughts on the matter.

So, what did these Leeds fans have to say in response to Southgate’s comments about Bamford?

“That’s a horrid cop out”

“Ban him from elland road”

“Bamford out scores Watkins in every stat this season. Silly decision.”

“What happened to being picked on merit? Such a joke.”

“Yea cause qualifiers prove so much. If performance in qualifiers mattered England would win every major tournament.”

“All the reason to change those players. Bamford has been in better form and has had a better season. Poor excuses from Mr.Southgate.”

“What a useless statement to make! What about form and scoring goals against quality opposition?”

Looking at the replies to this post, it’s clear to see that these Leeds fans are not happy with the fact that Bamford has not been included in this latest England squad or with Southgate’s justification for his decision.

Do you think Bamford should be in the England squad? 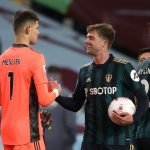 Given how Bamford managed to score more goals in the Premier League this season (17) than Everton’s Dominic Calvert-Lewin (16) and Aston Villa’s Ollie Watkins (14), who were both included in the England squad for their World Cup Qualifiers back in March, it’s understandable why these Leeds fans are disappointed to not see Bamford included this time around, in our view.

In other news: ‘Don’t spoil my day’, ‘Thanks for all the bad news’ – Many Leeds fans react as update emerges