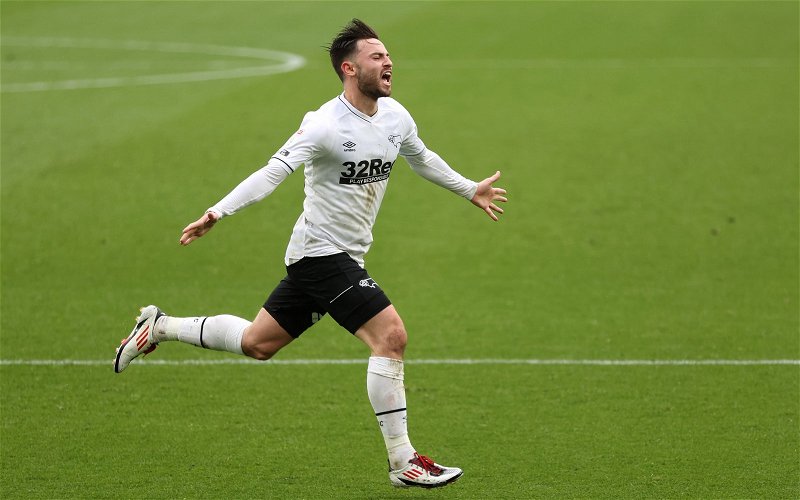 Derby County journalist Ryan Conway has been sharing his thoughts on the possibility of the Midlands club attempting to sign on-loan winger Patrick Roberts on a permanent deal during the upcoming summer transfer window.

This comes after Conway recently uploaded a video onto his YouTube channel where he spoke about a range of topics concerning the Rams, including their recent 3-3 draw against Sheffield Wednesday that secured their place in the Championship for next season.

During the video, Conway was asked if he thinks Derby should try and sign Roberts, who scored during their clash against Wednesday, on a permanent deal this summer.

In response, Conway had this to say on the matter (29.13): “I think [against Wednesday] was his best performance. I mean Man City honestly don’t have a use for Patrick Roberts, that feels cruel and obvious to say.

“I would sign him, my worry would be is he too much like Tom [Lawrence] and that isn’t a dig at all I just wonder if Derby need proper out-and-out wingers, guys that can stretch the pitch rather than want to cut inside but look, he’s lively.

“Obviously he shown pretty much every game something that he can do. He always looks to take a player on. I’d take him. I think I would like him on a permanent, but I would also like to add another wide player as well.”

Derby signed Roberts on a loan deal until the end of the season from Premier League leaders and Champions League finalists Manchester City back in the previous January transfer window.

Overall, the 24-year-old, who is currently valued at £1.8 million, made 15 appearances for Wayne Rooney’s side in which he managed to provide one assist and score his only goal for the Rams in their vital game against Wednesday.

Despite not being too consistent in front of goal during his time at Derby, the Englishman showed with his goal against Wednesday that he can turn up at the most significant moment and provide an attacking threat to the team.

In our view, if the Manchester club would be willing to let Roberts leave on a permanent deal this summer and Derby are willing to sign him, they should seriously consider putting in a bid for the winger and work with him to potentially become a crucial figure in the team for next season.

However, with Roberts’ current contract at City set to expire in 2022, Derby could also potentially look to sign him on another loan spell for next season and see how he performs over the entirety of a league campaign before deciding whether or not to sign him permanently.