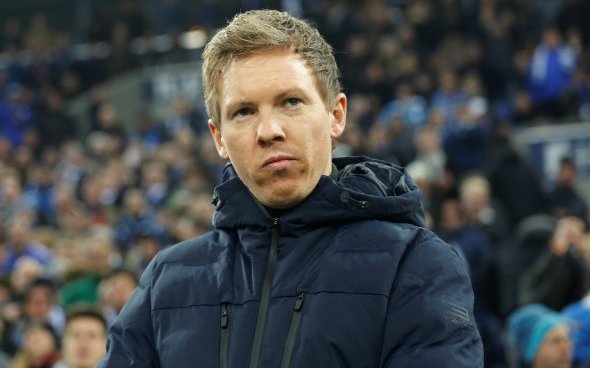 Journalist Alasdair Gold has been speaking on his latest Youtube video about all things related to Tottenham Hotspur following their defeat to Manchester United.

The loss against his old club has only added to the speculation surrounding the future of Jose Mourinho with his Spurs side slumped six points adrift of a place in the top four.

One name which has been linked with potentially replacing the 58-year-old if he is to face the sack is that of RB Leipzig’s Julian Nagelsmann.

Do you want to see Nagelsmann replace Mourinho?

Yes, he is the one

However, over the past few days, the 33-year-old manager has been linked with the potential vacancy at Bayern Munich with Hansi Flick reportedly set to be offered the German national job.

Gold covered the topic of the German manager’s potential interest in the Spurs job should Daniel Levy decide to change managers this summer.

He said: “Julian Nagelsmann, of course, we’ve spoken about before, as I said previously no secret that he’s got admirers at Spurs. And I believe certainly in the past that he’s been interested in Spurs, it’s been a project that appealed to him. (45:20)

“However, we know right now that especially with [Mauricio Pochettino’s] big night, that Bayern Munich, it’s probably going to push them into action. It looks like [Hansi] Flick is going to go to Germany, become the national coach, and that obviously will push on their movement.

“I mean, Nagelsmann said today that there’s been no contact with him or his agent whatsoever.”

Gold seems pretty convinced Nagelsmann is a serious candidate for the job if Levy does decide to sack Mourinho in the summer. The 33-year-old had been linked with the job towards the end of Mauricio Pochettino’s reign with the club.

It was interesting to hear Gold say Nagelsmann himself has shown interest in the Spurs job. The admiration from Spurs has been well reported by Gold, however, these latest comments may provide some fans with some optimism ahead of the summer.

Should Spurs finish seventh or worse then Mourinho will have guided Spurs to their worst Premier League finish since the 2008/09 season under Harry Redknapp.

It seems there is a huge few weeks for Mourinho coming up, a victory in the Carabao Cup final would have achieved the reasoning behind hiring him in the first place as it would end their 13-year trophy drought, otherwise, no trophy and another finish outside of the top four could leave him with a lot of questions to answer.