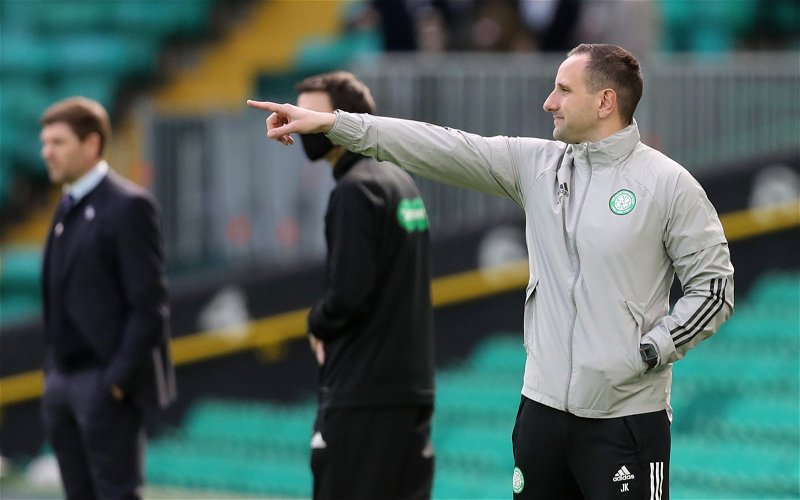 Sutton recently appeared as a guest on the latest episode of the Record Celtic podcast and the panel talked about multiple issues involving the Parkhead-based club, ahead of the upcoming Old Firm derby in the Scottish Cup.

The ex-Hoops striker was asked about Kennedy’s recent comments about the fact that Celtic are still the best team in Scotland, despite the Gers having won the title. Sutton believes that the comments were ridiculous and Celtic need to accept that they’ve had a woeful season and give credit to Steven Gerrard.

Ahead of the derby, Kennedy said that Celtic showed that they are the best team in Scotland in the previous Old Firm clash, suggesting they just needed to be more clinical in finishing.

Sutton branded the comments to be ‘delusional’ because what Kennedy said is simply not true this season.

He stated: “It’s a ridiculous thing to say. I mean, first of all, it’s absolutely not true. Everybody can see that. I mean, it’s slightly delusional to say that.

“Whether Celtic fans like it or not, I think that everybody has to sit back and applaud what Steven Gerrard has done at Ibrox this season, they’ve won the league easily. Celtic – it’s been a woeful, woeful season. Just accept it. And that’s what John Kennedy didn’t do.

“Now, Celtic still have a team who are extremely capable, a team which haven’t performed well enough this season, and on any given day, of course, they can go out and beat Rangers. But it was just a really daft comment to make, to say that Celtic are still the best team in the country when they have been annihilated this season.”

While Kennedy is certainly entitled to his opinion about his team, the Hoops are still quite a long way behind the Gers in the Premiership table, which shows the gulf between the two sides.

In the Old Firm derbies in the league, Celtic are yet to win one. While they got knocked out of the Europa League in the group stages, Rangers reached the Round of 16 of the competition, only to lose to Slavia Prague.

This clearly shows that Celtic have been an inferior side to Rangers this season and it is easy to see why Sutton is fuming at Kennedy.

In other news: ‘I wish I had stayed’ – Former Parkhead star drops big Celtic admission