Lots of Celtic fans have been talking about Joshua King after the Norwegian was linked with a move to Parkhead.

The Scottish Sun has recently reported about King, saying that potentially incoming Celtic manager Eddie Howe wants a reunion with the former Manchester United man and he has identified the striker as a replacement for Odsonne Edouard.

The report suggests that Howe will have to request King into taking a wage cut, if he wants to reunite with the forward at Parkhead. 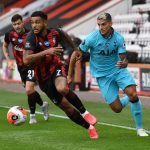 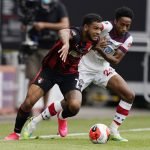 This update was relayed on Twitter by Scottish Sun Sport. Many Celtic fans made their views clear about the striker.

What do Celtic fans make of the news about King?

“Guys no even through the door yet n you’ve already worked out his whole summer transfer window.“

“He’d be colossal for us, would absolutely love him at Celtic.”

King joined Everton from Bournemouth themselves in the January transfer window, but he only signed an initial short-term deal at Goodison Park. The Toffees paid only a nominal fee to sign the Norwegian.

King is reportedly set to leave Everton in the summer and he currently earns £45,000 a week under Carlo Ancelotti. Howe is already working behind the scenes to identify signings for his stint at Parkhead.

“Talk about jumping the gun. He’s not even been confirmed as Celtic manager & you’re already stating his interest in transfer targets. I look forward to your Steve Cook ‘EXCLUSIVE’ tomorrow night.“

“IF we got him within our wage budget he would be unreal. Just turned 29, full international and proven quality.“

“Edouard and King as ST, Turnbull behind them, Calmac next to Soro, Jullien and Cook (If he comes) with an improved Barkas could be a very strong spine, Forrest right and Moi left.“
Credit:@DanielL03680036

Some of these Celtic fans would like to see King at Parkhead, while others just want to see Howe sign for their club soon.

While the 29-year-old has failed to get regular game time at Everton, he has played as many as 170 times under Howe. He scored as many as 50 goals under him, getting a total of 17 assists as well.

At Bournemouth with Howe, King helped the club get goals in the Premier League after doing the same for Blackburn in the Championship (as per Transfermarkt).

This might be a sign of the fact that King is someone that Howe can trust and because of that, he might be a reliable signing for him at Celtic.

In other news: ‘Teasing us now’, ‘Getting on my nerves’ – Many Celtic fans flock to post from their club