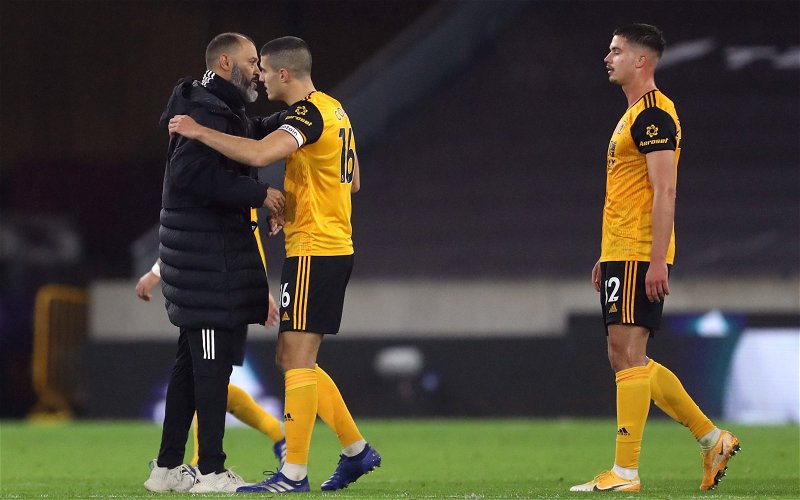 Bull has claimed that Nuno Espirito Santo has instructed Coady to get forward more often from set pieces, rendering him as more of an aerial threat in dead-ball situations.

Since scoring for England on his Three Lions debut against Wales, Coady has gone on to find the back of the net for Wolves in an indication he is growing in confidence in front of goal.

Speaking to FootballFanCast, Bull issued several key claims on how Wolves have re-configured the set-piece approaches of their defenders. “I think Coady used to be one of these sweeper defenders because we’ve got Willy Boly, Romain Saiss and [Leander] Dendoncker who go up for corners, so why does Coady need to?

“He’s been more of a threat than the others to be fair, so I think it’s down to Nuno – he would’ve said to him, ‘you’ve got the freedom to go forward.’

“We get the little defenders sitting back rather than the big one because you’d rather have your threat in front of goal instead of with their back to your own goal.”

With Nuno preferring a back-five system with three centre-halves, it seems the Portuguese tactician has injected a modern dynamism to the way he instructs his defenders.

With just 30 goals to their name this season – as many as relegation-threatened Newcastle and fewer than Brighton – Wolves need to summon goals from somewhere.

Giving Coady free rein in the final third when suitable is one optimisation that could begin to pay dividends – but he alone cannot shoulder the responsibility of finding the net.

In other news: ‘Struggling with their identity’ – Neville drops brutal Wolves claim; more ‘pain’ to come