In a blow to the Irons’ top-four charge, the combative midfielder has been ruled out for around four weeks having returned from international duty with a small tear to a lateral ligament in his right knee.

Rice, who was recently hailed as ‘outstanding’ by England boss Gareth Southgate, has been an instrumental facet in David Moyes’ side this season, playing every minute in the Premier League prior to Monday night’s 3-2 victory over Wolves.

Club captain Mark Noble was the man chosen to deputise at Molineux, however, McAvennie told Football FanCast that the 33-year-old hasn’t got the energy to fill the void moving forwards:

“To play Noble for six weeks could set us back, no disrespect to him, but he’s just not got the energy or the legs that the younger guys have. David has got to find energy in the middle.

“If Rice is caught out and Soucek is up beside him, the two of them have got energy to get back, but Noble can’t. But if Johnson or whoever he wants to put in – Benrahma, and may have to play him a bit deeper, but he’s still got the energy to get up and down. Lingard, I don’t think he’ll bring him that far back.

“It’s a strange one and it’s going to be a headache for David Moyes.” 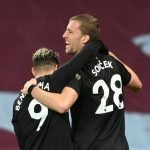 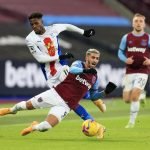 A playmaking midfielder, capable of playing across a number of attacking midfield positions – Benrahma would offer alternative qualities to the midfield role – likely giving more defensive responsibilities to Tomas Soucek.

Despite struggling to reach the heights of last season’s Championship campaign, the 25-year-old did enough in the first half of the season to persuade the Irons to complete his permanent £20m plus add ons (Sky Sports) signing in January.

Next up for the Hammers is a difficult clash with Leicester City at the London Stadium in what could prove a pivotal fixture in the race for Champions League football next season.