Tottenham Hotspur have dropped a hint about their 2021/22 home shirt.

The club have been celebrating 100 years since the cockerel logo first appeared on their shirts.

And they have confirmed that the new home kit will ‘pay homage to the original cockerel design’ (via Football.London).

This tallies a leak from Footy Headlines, which features said design on the inside.

If that leak is indeed accurate, the red AIA logo will be retained and this year’s navy shoulder will be done away with.

When will Spurs drop their new kit?

Last year, Spurs released both their home kit and their green away kit at the end of July, shortly after the end of the delayed Premier League season.

We don’t yet know if they will drop this year’s before the campaign comes to a close, giving them the opportunity to advertise it in their final couple of home games.

Football.London’s Tottenham Hotspur Facebook page relayed the news, and here’s what supporters made of it. 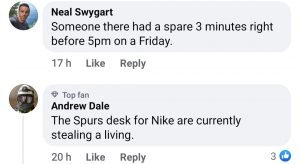