Former Newcastle United central midfielder Rob Lee has admitted the decision to give a new contract to lesser-seen striker Dwight Gayle is ‘confusing’.

Gayle has made just three Premier League starts this season, with his latest coming in the Magpies 2-2 draw with Tottenham Hotspur at St James’ Park.

The 31-year-old squandered two big chances in the match and lost possession on four occasions (as per SofaScore), before being replaced on 71 minutes by Allan Saint-Maximin.

Having previously been set to become out of contract this summer, the former Crystal Palace man has reportedly signed a new deal that will keep him with the Toon until 2024.

Lee, a Hall of Famer at the club, has questioned the logic behind the decision to reward a player of Gayle’s ilk with a new deal, in an interview with Football FanCast:

“I’d say it’s confusing from a player’s point of view because you’d look at it and think over the last 18 months he hasn’t played much, and when he has the goals haven’t been there and he’s rewarded with a three-year contract.

“If I was a player coming through I’d be questioning what has he done to earn that contract? I don’t know why they are signing him now because we’re in a relegation battle, and I don’t get why you would be signing players up unless they are planning to play in the Championship next season?” 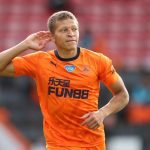 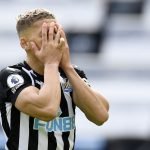 In 131 Premier League appearances, Gayle has managed 26 goals – including one goal in 12 outings this season.

Compare that to 60 strikes in just 101 Championship appearances, it’s easy to see why Newcastle would want to retain the striker’s services should they face the indignity of relegation.

However, should Steve Bruce keep the side up, the decision to keep Gayle at the club will take on a whole new complexion.

Either way, you can see Lee’s point of view as it would not be surprising if Gayle felt that he had not warranted a renewal given his record when handed his opportunities this season.