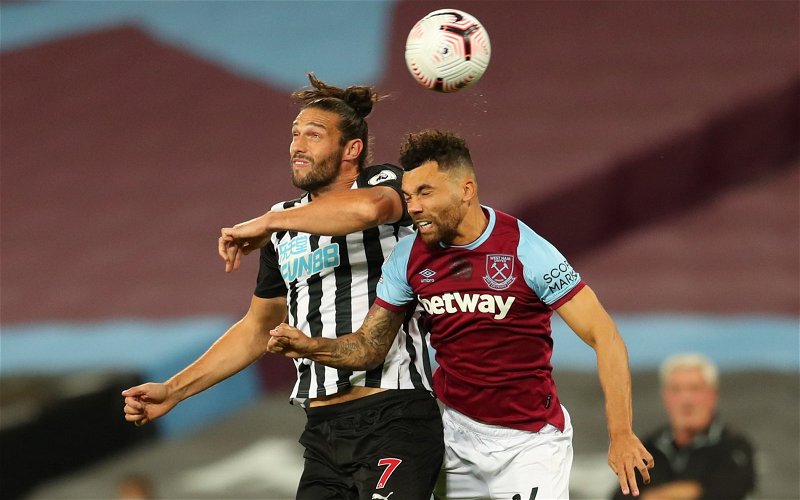 Many Newcastle United supporters have been reacting on Twitter after a post provided an update on Andy Carroll’s contract situation.

The Magpies recently offered fellow striker Dwight Gayle a three-year deal to remain at St. James’ Park, and now talk has turned to whether Carroll will receive a similar offer.

Steve Bruce has already revealed he expects to be working on a tight budget next season, as the club feels the financial impact of the pandemic, meaning the 32-year-old may have to accept a pay cut should he wish to extend his stay.

The former Liverpool and West Ham United target man is out of contract this summer and would be able to depart the Toon on a free transfer, but in a recent report, The Chronicle has suggested Carroll’s future may hinge on which division the Magpies find themselves in next season.

This led to The Chronicle asking Newcastle supporters if the former England international should be offered a new deal by the club, and their response was unequivocal.

“Please tell me a single reason why we’d make a contract offer to a player that is never put onto the pitch?”

“Any real club would be getting rid of its deadwood. We are not a real club right now.”

“No, Another striker who is well past his best, injury-prone and does not score goals. What is the point of having him?”

“No …. he’s finished. They shouldn’t have given him a deal for this season.”

Carroll has only played 376 minutes of Premier League football for Newcastle this season, bagging just one goal in the process, so it’s easy to understand the supporters’ responses.