Steve Bruce’s side earned three valuable points on Saturday against the Hammers to pull themselves nine points clear of 18th-placed Fulham in their fight against Premier League relegation.

However, the Toon Army did it without Hayden with the 26-year-old out of action for the remainder of the 2020/21 campaign following a knee injury sustained against Brighton & Hove Albion.

Will Hayden be a massive miss for NUFC? 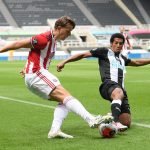 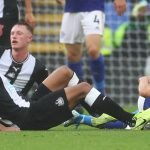 The Newcastle midfielder voiced his relief in seeing his teammates get the three points over the line late on against the Hammers.

He said: “And breathe… now I know what it’s like for fans watching at home, great win from the lads”

And the Newcastle fans flocked to his tweet to show their shared emotions following the dramatic end to the game.

“Haha!!! Love it We certainly like to make things difficult for ourselves. Great result. Have a word with Willock and convince him to sign a permanent deal with us please”

@ToonGirl82
“Honestly mate. Never do things easy. Talk about high blood pressure”
@MagTyneside
“Hard work sometimes but we love it really always hoping for that moment we can turn into world-beaters best wishes for your recovery”
@jimbergfeld1
“Aye that aged me about 10 years today Isaac! What a game for us and the neutral. Them 3 points could prove priceless in our run-in.”
@GeordieOllie
“Very stressful indeed. Love you Isaac”
@ConnorNUFC_
“Now you know the pain we go through”
@Stevemerrick78
“Absolute agony loving this club”
@Seniore13Gaming

Hayden had made 24 Premier League appearances for the Tyneside club this season, but he will have to watch from the sidelines for the remaining six games as a result of the significant knee injury he sustained.

Going by the reaction of these Newcastle fans, it is apparent they relate to Hayden’s tweet having suffered a nervous final 10 minutes of the game, which saw them strengthen their ambitions to remain a Premier League side.

In other news: ‘Flop of the season’, ‘Waste of a squad number’ – Many NUFC fans fume as news emerges