In an exclusive interview with This Is Futbol, Rob Lee, who made 280 Premier League appearances, believes Newcastle United have nobody else in their squad who can replace Callum Wilson’s goals and impact on the side.

Wilson has been out injured since he picked up a hamstring injury against Southampton and in that time the Magpies have failed to win and have seen Jamaal Lascelles become their top scorer during the games Wilson has missed.

Who was better, Wilson or Ba? 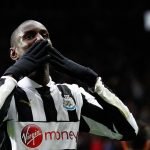 Newcastle have been desperate for a natural goalscorer since Demba Ba left Chelsea in 2015 and last summer they splashed out £20 million on Wilson following Bournemouth’s relegation to the Championship.

Speaking on the lack of players able to step up in Wilson’s absence and why the Magpies should not have to rely on one player, Lee told This Is Futbol:

“I think it’s probably a detriment to the team how much they need Wilson, you shouldn’t be relying on just one player.

“The problem we’ve had is that we’ve missed our top goalscorer, and no one has stepped up to the plate. We’ve got nobody that is playing well enough to step up.”

Wilson has been a rare shining light during Newcastle’s season with many fans calling for him to get an England call up before his latest injury.

The £46,000 per week striker has scored 10 goals this season which is 54% of all Newcastle’s goals prior to the Tottenham clash, as well as the Magpies failing to win a single game he hasn’t featured in.