Following the Hornets relegation to the Championship, the Reds were widely reported to be weighing up a potential £40m swoop for Sarr, along with arch-rivals Manchester United.

Ultimately, Jurgen Klopp and co looked elsewhere and signed Diogo Jota from Wolves in a deal worth £41m (BBC) – albeit tempered with young Dutch full-back Ki Jana-Hoever heading in the opposite direction.

Despite Watford being well-placed to make an immediate top-flight return – helped by 10 goals and four assists from the 23-year-old – Hendrie, a former Aston Villa and Stoke City wideman, told Football FanCast he expects major interest in Sarr once again this summer:

“I just think when you’re being linked with Liverpool, I personally think that he will end up going to if anything, maybe a top-five club, just because he’s had that sort of talk of him going to Liverpool – maybe they still have that interest.

“I think if he goes anywhere, I mean it’d be great to have a link with him, but personally I think he’d end up going to a top-five club if he was going to go anywhere.”

Given the impact made by Jota since signing, Liverpool will have no regrets over their choice of acquisition.

However, Liverpool are expected to re-enter the market this summer and attempt to further bolster their attacking options, with potential outgoings such as Divock Origi and Xherdan Shaqiri also freeing up space in the squad.

Sarr is well known to Liverpool after his brace ended their chances of an unbeaten Premier League campaign and was highly coveted by the Reds, meaning it’s eminently possible the interest remains. 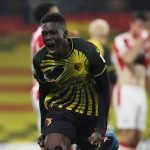 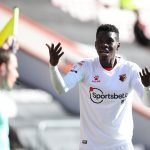 A compatriot of Anfield ace Sadio Mane, the former Southampton winger hailed the Watford man as ‘rapid’ upon arriving in England from Rennes for £40m (Sky Sports).