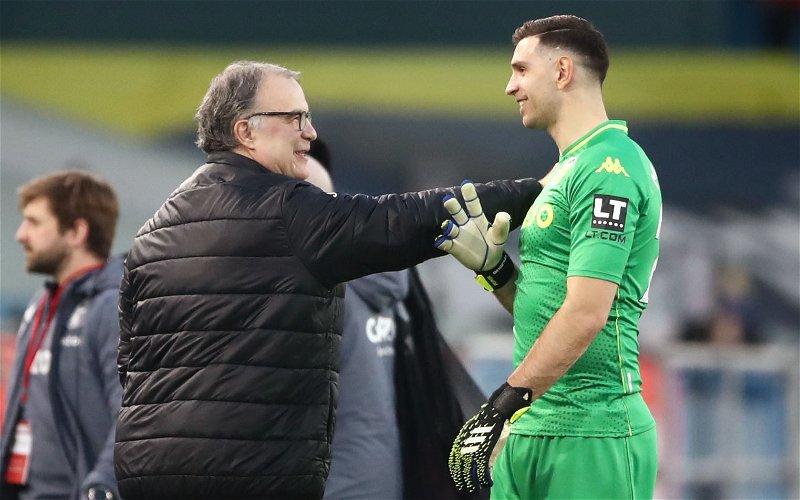 Leicester City boss Brendan Rodgers has recently hailed and issued praised for Leeds boss Marcelo Bielsa, revealing that he admires the Argentine and his work.

Rodgers recently appeared as a guest on the latest episode of the Robbie Fowler podcast and he was asked about his managerial experiences at the likes of Liverpool, Celtic and now at Leicester City. Rodgers also talked about the managers that he admires and went on to praise Leeds boss Bielsa, saying that he still has footage of him that date many years back.

Bielsa’s Leeds have already played Rodgers’ Leicester twice in the current season. Bielsa outdid Rodgers in the most recent meeting, helping the Whites beat Leicester 3-1. Rodgers though, did pick up an impressive 4-1 win over Leeds earlier in the season (as per Whoscored).

Is Bielsa better than Rodgers?

Rodgers talked about Bielsa on the podcast, saying that his tactics are unique and his sporting behaviour stands out as well.

The Foxes manager said (1:13:36): “Bielsa is someone that I’ve admired from way back when he was manager in Argentina. I’ve got footage of him going years back and then followed his career from that.

“He’s again [an] outstanding coach. A guy that wants to develop players. He’s got this unique man marking style that makes it difficult for any team. He’s someone I admired and also his sporting behavior as well. You know, he likes his teams to win and play in a certain way, whilst always having a  human respect for officials in the game. I always feel he’s very honest to the game.”

Rodgers’ comments about Bielsa would certainly please Leeds fans, especially considering that the Argentine has taken them back into the Premier League and they now seem on their way to a solid midtable finish as well.

While his approach to game is certainly unique, Bielsa has been described as someone who is noble and he’s performed humble acts as manager as well. Considering his playing style and approach, it is easy to see why fellow managers admire him and Leeds fans can only hope that he stays at Elland Road for as long as he can.