Leeds United have been backed to be a top-four side in the Premier League ‘within the next three or four years’.

Peterborough owner Darragh MacAnthony made the claim on the Hard Truth Podcast.

He hailed Leeds as a ‘big club’ which is ‘run by some clever people’.

Marcelo Bielsa’s side have excelled on their return to the top flight.

With seven games still to go, they sit 10th in the table on 45 points.

They’re only behind Arsenal on goal difference.

Leeds rank in the top six in the division for expected goals but must improve defensively.

Only two relegation-threatened sides – West Brom and Sheffield United – have given up more xG.

Leeds know they can’t be overconfident

Indeed, the doomed Blades offer something of a cautionary tale for their Yorkshire rivals.

Having finished ninth in their first season back, they have endured a woeful campaign.

They’re propping up the table after picking up just four wins from 31 matches.

It’s also unclear how long Bielsa will remain at Elland Road. On Thursday, the Argentine denied that he had agreed a two-year extension. 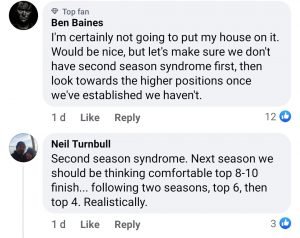