TalkSport insider Alex Crook thinks that it is almost a certainty that Sean Dyche will become the next Crystal Palace manager at the end of the season.

The Eagles are heading for something of a great reset when it comes to the team this summer, with a number of players out of contract, and Roy Hodgson also entering the final few months of his deal. As a result, the club have reportedly shown an interest in the Burnley boss, as well as former AFC Bournemouth boss Eddie Howe to take over at the end of the campaign.

Speaking on the TalkSport Gameday podcast, Crook laid out the latest when it comes to Crystal Palace’s decision over a new man in the dugout, with it almost seeming like a guarantee at this point that it will be Dyche that the club will turn to:

“I think it’ll be Sean Dyche. I think I mentioned a couple of weeks ago that he’d been spotted house-hunting in the London area. I think he’s had his flirtations with Palace before and I think he is aware now that he’s probably taken Burnley as far as he can, barring a flurry of money to spend this summer from the new owners that I’m not entirely convinced will be forthcoming.

“I would be surprised if it wasn’t Sean Dyche.” 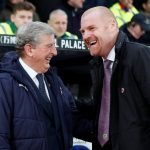 If Crook is right that the club are almost certain to appoint Dyche, then it doesn’t look like much of a forward step – more of a sideways one. If you take a look at where Crystal Palace under Hodgson and Burnley under Dyche finish in the league, barring that one campaign where Burnley finished seventh, it’s not as if they have pulled up many trees in comparison to Palace.

It just doesn’t seem very ambitious if the club want to take a big step forward, and whilst they might still be hesitant after the Frank De Boer experiment, surely there are better options out there for them to choose from if they want to be more than just a team whose sole aim is to stay in the league each year.