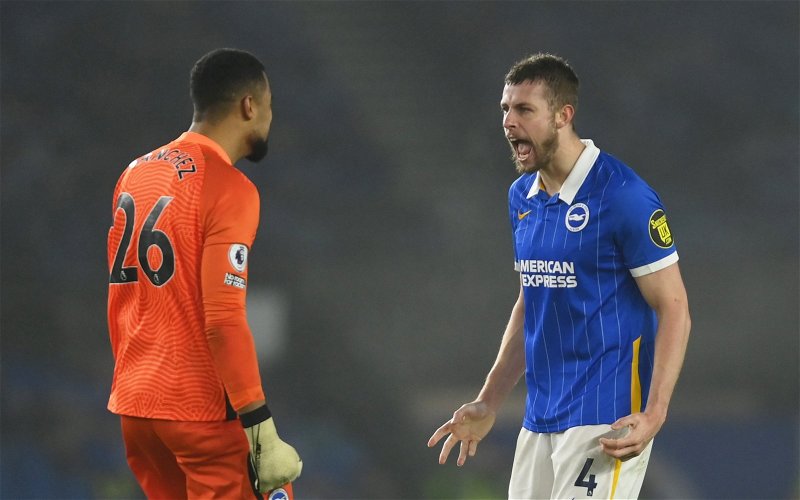 Journalist Johnny Cantor doesn’t think that Brighton boss Graham Potter will be in any mood to rush Adam Webster back from injury.

The 26-year-old defender, valued at £13.5m on Transfermarkt, has been out since February following some ankle ligament damage, but has said that he would like to be back in contention by this weekend’s game against Manchester United, a game that could give the Seagulls a big cushion from the bottom three if they were to pull off a win.

But speaking on the Albion Unlimited Podcast, when asked about the likelihood Potter will decide against tinkering with his lineup following their successive victories prior to the international break, Cantor felt that this might be a game too soon for Webster, and that it might be better if he were to be saved for games that they might have more of a chance of getting something from.

He said: “A lot of it obviously depends on the fitness of Adam Webster, and how his recuperation has continued, obviously seems a little bit worse than we first thought. So I don’t think there’d be any rush to push him back. I think they have missed him – his ability to take the ball out from defence, I think is a useful sort of potent weapon at times.

“But I don’t think they’ll rush him back because clearly, you’d probably say there are bigger games coming up towards the end of the season where they can help secure their place in the Premier League rather than Manchester United away.”

Is Potter the right man for the job at Brighton?

Cantor seems to be treating this as something of a ‘free hit’, and to an extent that is fair enough given where Manchester United are in the table, and it’s not as if Brighton are as desperate for points at the moment with a pretty neat cushion to the bottom of the table.

If they were in a lot more danger, then perhaps this might be the game to bring him back. But if he is deemed an important figure to them, then perhaps it’s best to classify him as ‘break in case of emergency’ and hold off until they desperately need him back in action.