In an exclusive interview with This Is Futbol, Daniel Pinder, editor-in-chief at Get German Football News, claims that reported Aston Villa target Milot Rashica is very similar to Leeds United star Raphinha.

The Werder Bremen attacker has been linked with several Premier League clubs, including Southampton and Leeds, in the past, with both teams needing to add more players to their squad to improve their depth within the final third.

Who is a better player? 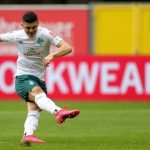 It was reported last summer that Aston Villa had agreed to meet the Kosovan’s release clause of £20.5 million, however the deal fell through when the attacker asked to double his £40,000-per-week Werder Bremen salary.

Speaking on what Rashica is like as a player and who he would compare him to that currently plays in the Premier League, Pinder told This Is Futbol:

“He plays a bit like Raphinha at Leeds as he has an explosive burst of pace, neat dribbling and is also a decent finisher.

“I think the problem he has had at Werder Bremen is that nobody is creating chances for him to finish.”

Rashica has had another steady season in the Bundesliga having found the net twice as well as setting up his teammates fives times in 19 league appearances.

The Leeds winger who he has been compared to, Raphinha, has been a star in the Premier League this season with six goals and six assists in 26 league games.