Aston Villa podcaster Omar Iqbal has been sharing his thoughts on Ross Barkley’s inclusion in the starting XI for Villa’s recent 2-2 draw against West Bromwich Albion as well as his performance in the game.

This comes after Iqbal made an appearance on the latest episode of The Villa View Podcast where he spoke about a number of topics concerning the Villans, including their draw against Sam Allardyce’s side at Villa Park on Sunday evening.

On the subject of Barkley, who started the game against West Brom but was taken off during the second half, Iqbal had this to say about the midfielder and his inclusion.

He said: “I was surprised he did start, but I was glad he started, because with Ross Barkley, I think he is one of these players, on his day, he can make a massive difference, and I think [Dean Smith] took a gamble.

“He thought this is lower-quality opposition in the Premier League, he’s going to get time and space, their defence isn’t the best, albeit obviously, they’ve improved under Allardyce. This is the kind of game where [you can] give him a chance, and hopefully, he gets the space to do something, and he did – at the end of the day, he looked dangerous.

“Yes, he wasn’t vintage, it wasn’t a perfect performance or anything like that, but it was much better from him. He was committed as well, he was determined, he was trying to make things happen.”

Villa signed Barkley on a loan deal from fellow Premier League side Chelsea back in September until the end of the current season.

Since joining the Midlands club from Chelsea, the 27-year-old, who is currently valued at £18 million, has made 21 Premier League appearances for the club, scoring three goals and providing one assist in the process (per WhoScored).

Given how Barkley had only made 20-minute cameos from the substitutes’ bench for his previous six league appearances for Villa prior to the West Brom match, it’s easy to see why Iqbal was surprised to see him in the starting XI to face the Baggies.

Were you happy with Barkley's performance against West Brom? 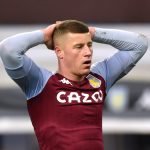 Looking at his performance in the game at Villa Park, the fact that he managed to earn himself a decent match rating of 7.03/10 for his efforts, making him the fifth-highest rated Villa player on the day, as well as having the highest passing accuracy percentage (95.4%) of any Villa player that started the game (as per WhoScored), shows that he had a fairly successful match, despite the draw.

In our view, if Barkley can continue being a useful figure for Villa until the end of the season and perhaps pick up some goals or assists along the way, this would surely end his loan spell with the Midlands club on a high note.

In other news: ‘Will depart in the summer’ – Journalist drops Aston Villa transfer claim