Charles Watts thinks that Arsenal might just have an inside line when it comes to their pursuit of Celtic’s Odsonne Edouard.

The 23-year-old, valued at £13.5m on Transfermarkt, has been a transfer target for the Gunners for some time now, and with fellow French forward Alexandre Lacazette potentially set to leave the club this summer, Edouard could be the man that they call upon to replace him.

And speaking on the latest episode of his YouTube show, Watts thinks that he would be the ideal man for Arsenal to bring in, before hinting at how previous relationships between both players and clubs might be the key to making the deal happen:

“I think a lot of people say ‘oh, he’s had a bad season; maybe this isn’t the best time to sign him in.’ He has had a bad season perhaps in terms of his goal record but he’s still scored 20 in 34 matches this season. You look at his record in France Under 21s, 16 goals in 12 games for them, that’s a record at that level for the French national team, he’s a really decent-quality striker.

“Very close to Kieran Tierney as well, they’re good mates, they were close when they were up there. Maybe that will help in Arsenal’s hunt of him if they decide to turn this interest into a real firm interest in the summer. Arsenal have a good relationship with Celtic, obviously got the Kieran Tierney deal done not too long ago. And for me, it just ticks all the boxes.”

Would Edouard make a good signing for Arsenal? 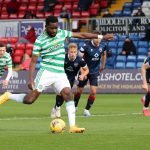 Given that there are a number of teams reportedly interested in signing Edouard, the Gunners might need every little advantage that they can get in order to persuade him to join, and the relationships that Watts mentioned could be crucial.

That could be more important if they don’t end up qualifying for Europe this season, because with teams like Leicester City and AS Roma supposedly interested, Arsenal don’t exactly have a lot going for them in terms of prestige that would have set them apart from other sides in the past.

In other news: ‘Ditch the players’ – Pundit urges Arsenal to make ‘huge call’