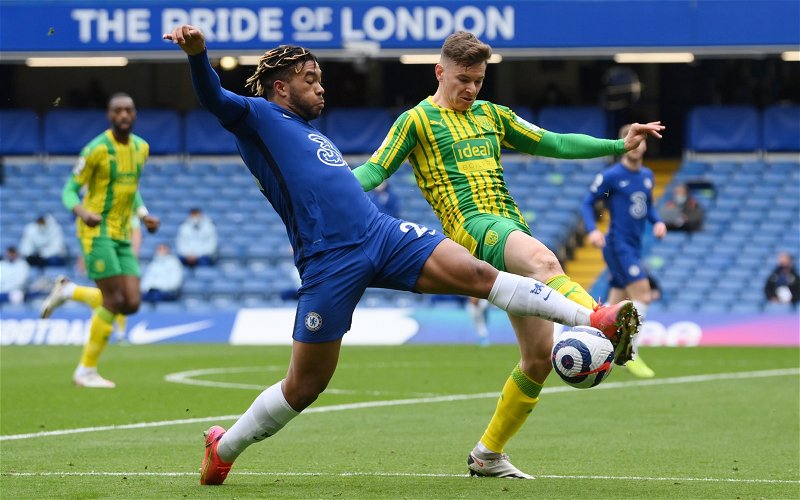 West Bromwich Albion podcaster and journalist Chris Lepkowski has been sharing his praise for Baggies left-back Conor Townsend, his season in the Premier League so far and his involvement during the club’s recent 5-2 win over Chelsea at Stamford Bridge.

This comes after Lepkowski recently co-hosted the latest episode of West Brom-themed podcast The Liquidator where he spoke about a number of topics concerning the Midlands club.

On the subject of Townsend, who played throughout the entire game against Thomas Tuchel’s side, Lepkowski had this to say about the defender.

He said: “A word about Townsend, who has been one of the real stars of this campaign. It’s not been an easy campaign. I think there have been many players who have underperformed, but he has been one who has completely turned that on its head.

“He’s been excellent. He’s grown into that role.

“I had major doubts at the start of this season about his suitability for Premier League football, but, here we are in April, and he’s doing backheels in Chelsea’s penalty area to create a fourth goal for us and it goes to show how much that little bit of confidence and that belief in his own ability has transformed a guy who a couple of years ago was playing lower-league football, into a guy who looks more than comfortable playing in the Premier League.”

West Brom signed Townsend in the 2018 summer transfer window from League Two side Scunthorpe United for a fee of just £756k.

Since then, the 28-year-old, who is currently valued at £1.35 million, has made 67 appearances for the Baggies in which he has scored just one goal and provided three assists along the way (per Transfermarkt).

Given how Townsend has earned himself an overall season rating of 6.77/10 for his performances throughout the campaign, making him the fifth-highest rated player in West Brom’s current squad, it’s understandable why Lepkowski has this praise for the defender, despite having previous doubts over his ability.

Have you been impressed with Conor Townsend this season?

As well as this, Birmingham Live gave the full-back a match rating of 8/10 for his performance against Chelsea which also highlights just how well he did during the victory in west London.

In our view, if Townsend can end the season with some other solid performances under his belt, then he would undoubtedly put to bed any similar doubts that Lepkowski had over him from any other Baggies fans.