Former Sheffield Wednesday midfielder Carlton Palmer has warned against touting Osaze Urhoghide with a move to the Premier League so early in his career.

Despite only making a breakthrough into the first-team at Hillsborough this season, recent reports have claimed top-flight club’s Leeds United and Crystal Palace are keeping an eye on the 20-year-old.

With Championship high-flyers, Watford also believed to be interested, Urhoghide has certainly caught the eye in his fledgeling career to date.

But Palmer exclusively told Football FanCast it’s too soon to be discussing a move for the central defender, who Owls manager Darren Moore described as ‘immesnse’ following his performance against Barnsley earlier this term:

“How many league games has he played this season? I don’t think he’s played 20 Championship league games. So you can’t just start saying that kid’s got into the first team, done well – and he’s done well – and then start linking him with Premier League clubs.

“That’s what we do in the UK, somebody comes on the scene and all of a sudden, they’ve started playing well. And then after 10-15 games, they should be joining Barcelona, doesn’t work that way.”

In 12 league appearances this season the centre-back, valued at £270,000 (as per Transfermarkt), has earned an average Sofascore rating of  6.66.

Will Urhoghide stay at Sheffield Wednesday next season? 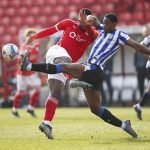 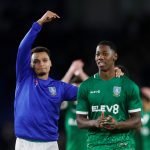 Urhoghide may well have a bright future ahead of him, but Palmer is right to dampen the furore at this early stage, given the youngster has only played 17 senior matches to date.

That said, should summer interest be forthcoming, Wednesday could struggle to repel offers unless their second-tier status is maintained at least, something that is highly uncertain right now.