Leeds United fans have been reacting to the performance of Patrick Bamford during their game against Liverpool.

Overshadowed somewhat by news off the pitch, there was still a game to be played and whilst the match was more important to the visitors given their place in the Premier League table, the message was clear from Illan Meslier before the game that Leeds want to finish the season strong.

However that message, at least according to the fans that were watching at home, didn’t seem to be passed on to the forward, as his performance was brought into question on social media, especially after he missed a great chance to give the home side the lead just before the 25-minute mark, as he failed to add to his tally of 14 goals already this season:

@WAFLL_92
“Bamford is playing in slow motion.”
@xlewjayx
“Bamford looks like someone we picked up on the way to Elland Road, hey have you got a pair of boots, want a game.”
@Mincer151
“Sloppy this so far from us. Bamford’s touch has been awful”
@krlufc67
“That chance is why Bamford won’t go to the Euros”
@dylanastle1
“Bamford’s first touch is horrendous”
@JackLambert18 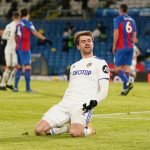 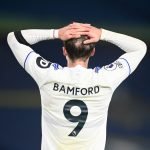 Obviously there isn’t anything majorly at stake for Leeds, but if for nothing else than pride, hopefully his performance picks up in the second half.