Former Premier League star Keith Gillespie has told This is Futbol that Marcelo Bielsa will stay at Leeds United this summer and attempt to take them into the top six.

The Argentine has done terrific work at Elland Road since his appointment, finally guiding the club out of the Championship and back into the Premier League. 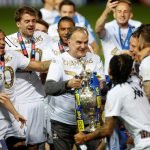 They have been quietly efficient in the top-flight, too, as they are safely in 11th, 16 points clear of the relegation zone.

There is next to no chance of them dropping back down at the first time of asking but there remains some degree of uncertainty over the Argentine’s future, as his contract expires at the end of the season.

Gillespie, though, insists that he will sign a new deal and stay at the club, as he looks to finish what he has begun to build.

Indeed, the former winger, who played for the likes of Manchester United, Newcastle United, and Blackburn Rovers, thinks that he will have set his sights on taking Leeds into Europe.

Speaking exclusively to TIF, he said: “Bielsa’s been fantastic. I’ll be very surprised if he isn’t there next year. He’s got the club promoted.

“You’d probably want to try and move on to that next step, which is probably the top six, qualifying for Europe, and keep bringing the club forward.”