David Ornstein has been speaking on the latest edition of The Athletic’s The Ornstein & Chapman Podcast about various topics from the world of football.

One issue which he spent some time on was Ezri Konsa and his England future and just how good he could be.

The 23-year-old, who is valued at £16.2m by Transfermarkt, has just recently signed a new deal at Villa Park to keep him there until the summer of 2026.

However, he is yet to receive a senior England cap despite impressing for Villa this season, and Ornstein revealed, while he was talking with Gregg Evans, that there are people in the game who think that the former Brentford man will become a better player than Tyrone Mings.

He said: “I do speak to a lot of people within the game around Villa and elsewhere who have this quiet sense that Konsa is actually superior, or on the path to being superior, to Tyrone Mings; he qualifies to play for England. He’s just signed a new contract at Aston Villa; as you [Gregg Evans] reported, he qualifies to play for a couple of other countries as well, I think DR Congo and even Portugal we mentioned in my column a few weeks ago.”

Do you think Konsa can be better than Mings?

Yes, he can be much better 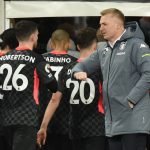 No, Mings will always be better

Villa signed Konsa from Brentford for £11.97m in the summer of 2019, and after playing a few games at right-back last season, this season he has played 27 of Aston Villa’s league games as a centre-back.

His performances have earned him an average WhoScored rating of 6.81, which puts him in 12th place in Villa’s squad, which is decent considering some of the standards his teammates have set.

However, it doesn’t look like Konsa will be playing for England at the delayed Euro 2020 tournament after he missed out on selection for the last England squad.

Judging by what Ornstein said, though, many people are expecting big things from Konsa, and we will be intrigued to see how he develops and hope that he has a bright future.