Fans of Celtic have been reacting to a post on Facebook, which relayed a report regarding John Kennedy’s decisions in the Hoops’ recent draw with Dundee United.

In a fixture that saw Celtic relinquish the Scottish Premiership title – a crown the Bhoys had held for nine years – an article by The Celtic Blog emerged that lambasted Kennedy’s “dire substitutions” in the clash with Dundee United.

The piece alleged that the 37-year-old’s decision to withdraw David Turnbull – who earned a highly impressive SofaScore match rating of 8.1/10 for his performance – ranking him as Celtic’s best player on the day – in the 62nd minute was the first of these disastrous decisions, with the second being Kennedy’s replacing of defensive midfielder Scott Brown with winger James Forrest.

Should Kennedy be removed immediately?

And, after it was relayed by Celtic News Now on Facebook, fans of the Hoops flocked to have their say on the matter, with many calling for the Bhoys’ interim manager to be removed from his position.

So, what exactly did these Celtic fans have to say in reaction to the report regarding John Kennedy’s substitutions? 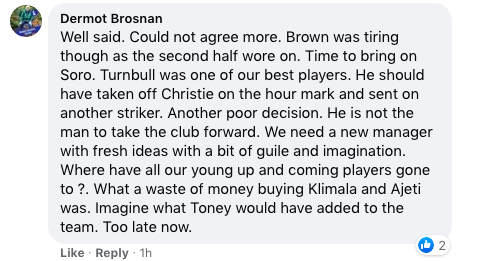 All in all, it would appear as if these Celtic fans have not been overly impressed with Kennedy in his short time in charge of the club, and, considering the manner in which the Hoops handed their Old Firm rivals the title against Dundee United on Sunday, it is not difficult to see why.