Celtic fans have been reacting to news of a new contract that has been handed out at Celtic Park.

The club announced that 22-year-old goalkeeper Conor Hazard has signed a new contract at the club that will keep him there until the summer of 2023. The academy graduate has spent most of his young career so far out on loan with clubs like Falkirk, Partick Thistle and Dundee, but has made more of an impact this season, making six appearances so far, including making his European debut against Lille in the final group game of the Europa League.

It’s safe to say that these Celtic fans were rather delighted with the announcement:

“Great news”
@WeeMcCrossan88
“Delighted for the young Irish man . Big part of in the quadruple treble triumph”
@Hughbhoy
“Brilliant”
@CiaranShevlin
“Give him the jersey now.. He’s the future, let him find his feet with no pressure on him”
@chauzelmac
“This is good news. Hopefully the big fella gets some games in the Scottish Cup between now and the end of the season.”
@eightsixonesix
“Amazing!!”
@Zander_lat

Was this the right move for Celtic to make? 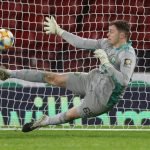 Former Celtic forward Chris Sutton has suggested on the Record Celtic podcast that the goalkeeper position needs to be a priority this summer, so quite what this latest move is going to do to the order of things will be interesting to see.