Lots of Celtic fans have been discussing a news update about the Old Firm that recently emerged on social media.

Sky Sports journalist Anthony Joseph has recently tweeted about the Old Firm, saying that Willie Collum will be the official in the upcoming clash.

This will be the third Old Firm derby of the season in the Premiership and Steven Gerrard’s men have won both previous encounters this term. While it was reported the upcoming derby could be called off, it seems to be going ahead now.

Will Willie Collum have an impact on the Old Firm? 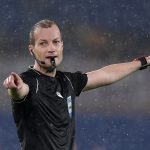 Joseph’s tweet about Collum’s appointment drew the attention of a lot of Celtic fans, who made their views clear about the news.

What did Celtic fans make of Collum’s appointment?

“The man with the most cards, most penalties in Scottish football by almost double the next ref. I’m sure it’ll all go well.”

“Be as well cancelling it if he’s the ref.”

Collum has refereed multiple Old Firm games in his career. He officiated the League Cup final of the 2019/20 season, which Celtic won. He was also the referee of an Old Firm clash in September 2018, where the Hoops were also victorious (as per Transfermarkt).

While Collum will be the man in the middle on Sunday, Frank Connor and Sean Carr will be his assistants for the tie. The game is expected to go ahead, as things stand.

“Congratulations to Rangers for going invincible.“

Collum has taken charge of a total of 73 games in which Celtic have been involved. In these outings, the Hoops have lost only ten times, winning as many as 54 of them.

He has refereed 51 Rangers games and the Gers have lost 12 times, which suggests that he could well be a good omen for the Bhoys.

While the Premiership title is now out of their reach, a win in the Old Firm on Sunday would help Celtic get hold of some bragging rights in the city of Glasgow.