Celtic: Journalist talks about Graham Potter’s suitability to the Hoops

Journalist Michael Gannon has spoken about the idea of Graham Potter managing Celtic.

This came after Gannon appeared as a guest on the latest episode of the Record Celtic podcast and the panel talked about multiple issues involving the Hoops.

One topic of conversation was potential managerial candidates for the Hoops and one man they talked about was Graham Potter. Gannon believes that the Englishman would be an interesting option for the Bhoys.

Potter has been at Brighton since the summer of 2019 and has previously managed Swansea City. Brighton are currently 16th in the Premier League, but the Seagulls have conceded as much as champions Liverpool so far this term.

Do you think Celtic should consider Graham Potter? 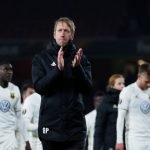 Gannon believes that Potter is a builder and he’s the kind of manager who will fit the bill for the Bhoys.

Apart from having managed Brighton and Swansea, 45-year-old Potter made his name at Ostersunds in Sweden and has also been a technical director of the Ghana women’s national team.

This shows that he’s a well-experienced football coach, who professes an approach to the game which relies on attacking football that uses width and attacking output from the wing-backs.

This is potentially a very good sign when it comes to Potter’s abilities. Having said that, there are no apparent signals that he will leave Brighton anytime soon. So perhaps, Celtic should forget about having Potter as their manager.