Wolves journalist Alex Dicken has made a claim on Old Gold winger Pedro Neto and his future at the Midlands club.

This comes after Dicken made a guest appearance on a recent episode of the Liverpool Echo’s Blood Red Podcast where he previewed the Premier League clash between Wolves and the Merseyside club.

On the subject of Neto and his season so far, Dicken had this to say on the matter. (14.57)

He said: “He’s a contender to win the PFA Player of the Year, so much talent, so much speed, so much skill, just an absolute find for Wolves and the question now again is going to be can they hang on to him because there’s going to be so many big clubs looking at him and thinking that really the world is his oyster, he can be anything he wants to be so, it’s going to be a nervy summer, to be honest.”

Wolves signed Neto back in the 2019 summer transfer window from Italian side Lazio for a fee of £16.11 million. Since then, the 21-year-old, who is currently valued at £24.3 million, has made 76 appearances for Nuno Espirito Santo’s side across all competitions prior to their match against Liverpool, in which he has managed to score 10 goals and provide nine assists along the way (per Transfermarkt).

Given how Neto is currently Wolves’ joint-top scorer in the Premier League (5) and provided more assists (5) than any other player in their squad, with an overall season rating of 7.17/10 for his league performances, making him their highest-rated player, this shows just how important he has been for the team this year (per WhoScored).

Has Pedro Neto been Wolves' best player this season? 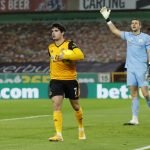 If the winger can continue this impressive run of form throughout the remainder of the season, there’s every possibility that he could end up on the radar of other clubs that could be interested in signing him during the upcoming summer transfer window, leaving Wolves with a fight on their hands to keep hold of him.