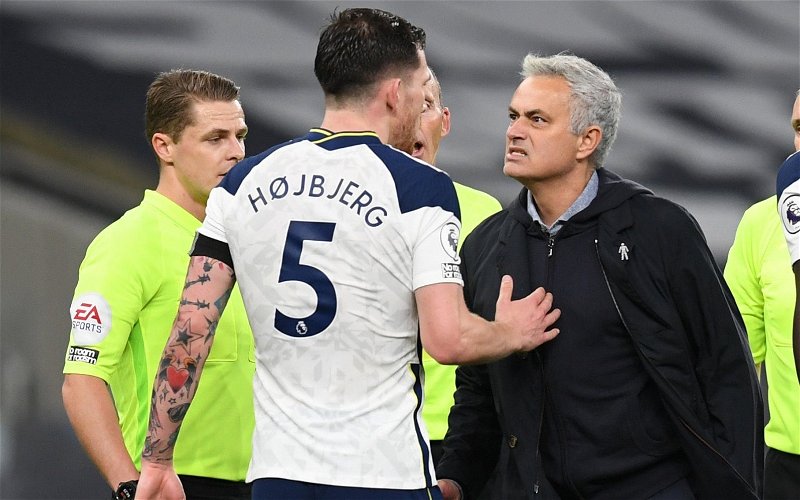 Patrick van Straaten has featured on the latest edition of Football Daily’s Sunday Vibes as the panel discussed each Premier League side’s top performer this season.

However, Van Straaten was not so complimentary of Pierre-Emile Hojbjerg’s recent form as Tottenham Hotspur have endured a difficult spell of results.

Spurs signed the Danish midfielder last summer from Southampton for a fee believed to be in the region of £15m and a salary of just over £100k per week.

Speaking on the £31.5m-rated midfielder prior to Spurs’ win over Aston Villa on Sunday, Van Straaten had this to say about the 25-year-old’s recent displays for Spurs.

He said: “Hojbjerg has really, really gone off the boil lately.

Has Hojbjerg been overplayed by Mourinho?

Hojbjerg has played every minute of every Premier League game Spurs have played this season, however, he did not feature in last week’s Europa League defeat against Dinamo Zagreb after being suspended for accumulating too many yellow cards (via Transfermarkt).

Van Straaten is probably correct to pick up on a dip in form from Hojbjerg, however, you have to look at the possible reasons behind it.

Jose Mourinho has been unable to find Hojbjerg’s nailed-down midfield partner this season. Tanguy Ndombele has featured predominantly alongside him, however, the Frenchman rarely finishes games, which may suggest he either has fitness issues or he is a prime target for sacrificing when chasing a lead.

In addition, Hojbjerg has played every second of every Premier League game this season which could have the 25-year-old on the edge of his own limitations fitness-wise.

Given Van Straaten was slightly sympathetic towards Hojbjerg, perhaps the root of the problem lies elsewhere other than the Dane himself.