Despite their win against Burnley on Sunday, Jose Mourinho’s men still find themselves off the pace when it comes to qualifying for the Champions League this season through the league, meaning that doing so via the Europa League remains arguably their best chance of making it to Europe’s elite competition.

This is why O’Hara, as heard on the TalkSPORT Daily podcast, claims that they must now focus their whole season on that competition and use that as the priority rather than seeing it as an opportunity to rest players in the Premier League.

He said: “I think they can win it, I genuinely do. If they play like they’re all of a sudden they’re playing and all of a sudden you’ve got Gareth Bale, who’s firing on all cylinders. You’ve got Kane, you’ve got Son, Dele Alli who’s going to be fresh for Europa League games, then of course, they’re going to cause so many problems.

“And I think now it’s just about keeping Bale fit at 100% and hungry, and picking and choosing that 11 at the right moment because apart from Dele Alli, who I think deserves to start in the Premier League, I think that 11 yesterday for Spurs is their best team.” 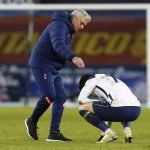 O’Hara’s comments do offer up a lot of risks if Spurs were to go down that route, because it’s not exactly a given that they will go through that way, as there are still some pretty big teams left in the competition like Manchester United, AC Milan and Arsenal – so his claim that they could go all the way is sure to raise some eyebrows, particularly when you consider their recent league form.

So it shouldn’t be a case of abandoning all hope in the league just yet, otherwise they could end up throwing that away, find themselves knocked out of Europe and end up with nothing at all to show for it.

Perhaps it’s something to examine if they get further down the road in the competition, but certainly not when we’re still in March.