Tottenham Hotspur fans have been reacting to the performance of Ben Davies, who is valued at £15.75 million (as per Transfermarkt), during their game against Dinamo Zagreb in the Europa League.

With Spurs desperate to end their long trophy drought, it was always going to be important that Tottenham got off to a good start in the first-leg to give them something comfortable to work with going into the second-leg in Zagreb next week, and they came into the game on something of a hot streak.

One player though who, at least in the eyes of the supporters watching at home, who was doing his level best to make things as hard for them as possible was the Welsh left-back, whose night was probably best summed up with a rather weak effort (via @StuTilly26) to get on the scoresheet inside the first 15 minutes.

And there was nowhere for him to hide, as there was a torrent of criticism coming his way from the fans online:

“Ben Davies who has scored about 3 goals in 5 years is trying to smash it in from 25 yards out on the volley. I’m sick of this guy”

@CraigTyler_
“Ben Davies is literally Championship standard”
@jme_900
“Ben Davies is so much worse than Reguilon”
@thfcturbo
“If the answer is Ben Davies, then what is the question?”
@rich_atkins
“I can’t stress how much I hate Ben Davies”
@Robwhitt07
“I’m scared with Ben Davies at the back”
@Ygjez 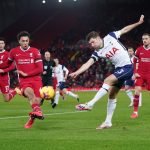 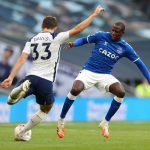 Hopefully fewer performances like this are in his future if Spurs are to have a chance of winning the tournament.