A lot of Tottenham Hotspur fans have taken to Twitter to vent their fury at a report from Alasdair Gold regarding the future of Harry Winks.

The Spurs journalist claimed the 25-year-old to be unhappy at his current situation at the north London club and the expected return of Oliver Skipp will not help his case for more game time.

Winks, rated at £19.8m by Transfermarkt, has only made 10 appearances for Spurs in the Premier League this season, however, he has only played 70 minutes of league action since their 3-1 defeat to Liverpool back in January (via Transfermarkt).

In reply to Gold’s report for Football.london, the Spurs fans voiced their thoughts on Winks’ future at the club.

@thfcnathann
“Please leave”
@xthfchans
“Just go”
@SergiRegui3
“Hope winks leaves don’t rate him give skipp a chance and more game time”
@battams_luke
“he should be happy he got as many minutes as he did”
@TanguyNdombelly
“His performances have been poor should sell him he’s not improving and contributes very little”
@AlexTaghd
“He’s not good enough. Sell in the summer.”
@choffspurs
“Remind me what he did in the Europa League? He was worst than bad in that game.”
@OliverMisher
“WINKS LEAVING OMDSSSSSS”
@Alfie_Thfc 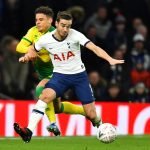 Winks was linked with a move away from Tottenham in January with La Liga side Valencia rumoured to have been interested in a half season-long loan deal, according to Sky Sports.

Going off the reaction from the Spurs fans, it appears many of them would like to see Spurs offload their midfielder in the summer with Skipp set to return from his Norwich City loan spell.

In other news: ‘Better than Vieira’, ‘Future captain’ – Many Spurs fans swoon over £31.5m-rated ‘baller’