Fans of Tottenham Hotspur have been reacting to a post on Twitter, in which Spurs’ team news for the North London Derby was announced.

Heading into the fixture against Arsenal, Tottenham have been in improved form of late, winning their last three consecutive Premier League fixtures, having lost five of their previous six before that.

However, after Tottenham shared Jose Mourinho’s starting XI for the game on Twitter, fans of the club appeared furious with a number of the 58-year-old’s decisions for the clash, with many singling out the fact that the Portuguese manager has opted to start Matt Doherty at right-back ahead of Serge Aurier.

Should Aurier be starting ahead of Doherty? 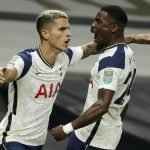 So, what exactly did these Tottenham Hotspur fans have to say in reaction to Jose Mourinho’s starting XI to face Arsenal on Sunday?

“THERE IS NO WAY HES PLAYING AN ARSENAL FAN AGAINST ARSENAL.”

“WE ARE RELYING ON THIS GUY.”

“Nearly the perfect line up, Doherty needs to step up and prove everyone including myself wrong.”

“Happy with that, only change I’d make is Serge for Doherty.”

“Other than our RB not being able to cross I’m happy with that COYS.”

“This is Doherty’s big chance if he doesn’t play well today I give up on him.”

All in all, it would appear as if these Tottenham fans are far from happy with Mourinho’s decision to start Doherty against Arsenal.

However, considering the fact that the right-back has actually averaged a WhoScored match rating of 6.72 over his 14 Premier League appearances so far this season – ranking him as the club’s 11th-best player in the top flight – perhaps it could be argued their comments are slightly over the top.