A lot of Tottenham Hotspur fans have flocked to a post from Hotspur Related, which has relayed news from L’Equipe regarding Hugo Lloris.

Its report claims that Lloris is open to leaving Spurs in the summer and he seems to think that Tottenham will never genuinely challenge for titles under the club’s current policy (L’Equipe via Hotspur Related).

This has drawn these Spurs fans’ attention, who seem to be happy to let Lloris go.

“Time to upgrade anyway. Poor captain. Too many mistakes. Terrible with the ball at his feet”

Do you think this is for the best?

Yes, time for Lloris to go 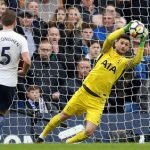 Spurs have been linked with a replacement for Lloris this summer, with the likes of Nick Pope and Dean Henderson reportedly being considered, so if he does go, you would think they would have replacements in mind.

However, Lloris has been a great servant to Tottenham, making 363 appearances for the club, and these fans recognise this.

“How sad, poor Hugo he’s given his best years for the club and probably told each year the next season will be ‘our year’ only to see same old same old every year. Profit for ENIC before any club honours.”

“A fantastic servant to the club these past 9 years, he deserves his move to PSG, best of luck Hugo.”

Lloris’ contract doesn’t expire until June 2022, though is only valued at £8.1m by Transfermarkt, so if he does decide that it is time to move on, we can’t see Tottenham making a huge amount of money from his sale.

This news about Lloris has clearly gone down well with some Tottenham fans, while others would be sad to see him leave.