A lot of Tottenham Hotspur fans have flocked to a post from Daily Hotspur, which has relayed news from Alasdair Gold.

The Football.london reporter relayed news from Jose Mourinho regarding Giovani Lo Celso, and it looks like the Argentine is fit to be involved on Thursday against Dinamo Zagreb.

This has drawn the attention of these Spurs fans, who are buzzing with this update.

“Genuinely could turn our season around”

“This is big for us, give us something more going on midfield”

Do you think Lo Celso will make a difference? 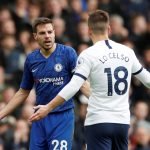 Lo Celso has missed 23 games for Tottenham with a hamstring injury, but it looks like he is ready to return, which has clearly gone down well with many Spurs fans.

“I’m not kidding when I say that Lo Celso is likely going to be crucially important to how our season ends. I would rather see us push Ndombele up into the 10 and play GLC alongside Hojbjerg.”

The 24-year-old averages a superb 7.51/10 rating in the Europa League and has scored two goals in five appearances (as per WhoScored), so if he is fit for tonight’s clash, then he could help Spurs as they look to seal progress into the next round.

Lo Celso’s return has clearly gone down well with these Tottenham fans, and we will be intrigued to see how much game time he gets on Thursday.