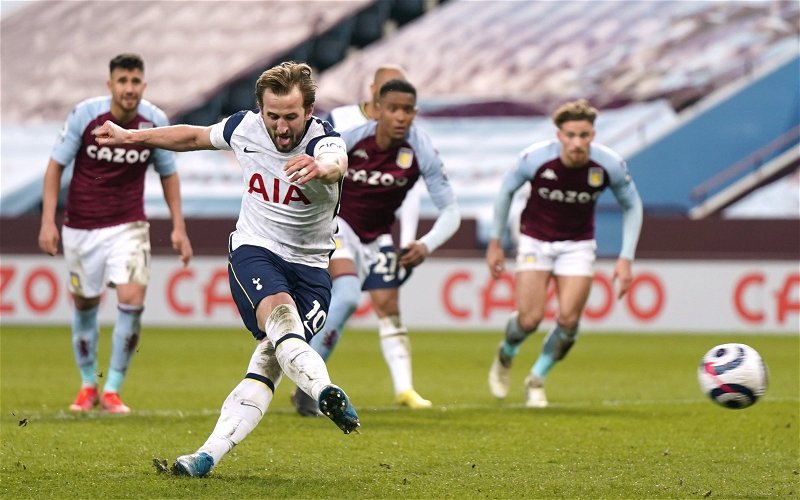 Former Premier League referee Mark Halsey has been sharing his thoughts on the penalty decision that Tottenham Hotspur striker Harry Kane was given by Mike Dean during the north London club’s recent 2-0 win over Aston Villa in the Premier League.

Speaking exclusively to This Is Futbol, Halsey was asked his thoughts on Dean’s decision to award a penalty to Spurs after Villa right-back Matty Cash collided with Kane in the home side’s penalty box during the second half of the match.

He said: “When you go into the penalty box in that manner and you go to ground in the way he did, you’re always going to ask questions of the referee. Now, the ball hadn’t gone out of play, so the ball was still in play.

“The ball is going nowhere; the ball is going out of play. A defender of Matty Cash’s standard shouldn’t be going to ground and when you do go to ground and the player goes down and you catch him, and he did catch him, whether Harry Kane makes a meal of it is neither here, neither there because you see many players that deserve penalties that don’t get them because they don’t go down.

Do you think Kane's penalty was a soft one?

Kane’s penalty goal ultimately secured the win for Jose Mourinho’s side after Carlos Vinicius managed to open the score to put the Lilywhites ahead in the first half of the game.

In regards to the penalty decision, it would seem that Cash’s actions in the box gave Dean a straightforward decision to award Spurs the spot-kick, which will be disappointing for the defender and his Villa teammates.

Moving forward, Mourinho’s side will be delighted with this win against Villa heading into the international break with a view to continue picking up points throughout the remainder of the season to try and force their way into the top four of the Premier League table.