Former Premier League referee Mark Halsey says that it was the right decision for VAR to rule out Che Adams’ goal for Southampton against Bournemouth at the weekend.

Ralph Hasenhuttl’s men came away 3-0 winners and clinched their place in the FA Cup semi-final, but things could have gone a lot better for them were it not for the intervention of VAR, first to rule out a Cameron Carter-Vickers own goal in the first-half and then Adams’ effort in the second.

And speaking exclusively to This Is Futbol, Halsey said that whilst he agreed that the second goal was offside, saying that it was a pretty easy decision to make compared to some of the others, like the first one where Kyle Walker-Peters was adjudged to have been off:

“The second one, it was clearly offside. You can tell straight away, yes he&#8217;s offside. That’s not a problem, it’s the really, really tight ones you know, the armpit, the toenail, the heel or the front of the knee, they’re the really tight ones.

“It’s been consistent so we cannot complain, but you know we don’t want to see goals rolled out of that nature, we just don’t. We go to celebrate goals; players don’t know whether they can celebrate anymore or not.”

Who is the better forward? 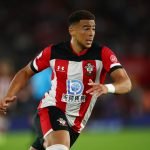 At the end of the day, there can’t be too much complaining from Southampton given the overall outcome of the game, the only real downside could perhaps come from Adams himself who had a goal ruled out that could have been able to add to his impressive recent tally. Hopefully, he doesn’t miss out on a goal bonus as a result of it.