Newcastle United fans have been reacting to some footage of former player Aleksandar Mitrovic whilst on international duty.

The 26-year-old forward hasn’t had the best of times this season, failing to make a real impact on the first team with only ten league starts at his current club Fulham and only managing to score three goals in all competitions.

But he clearly hasn’t lost his goalscoring touch, as he showed for Serbia last night against the Republic of Ireland with this very impressive goal to help them on their way to a 3-2 win to kick off their World Cup qualifying campaign.

Mitrovic scored 17 goals during his time on Tyneside, but as this interview with The Daily Mail details, it wasn’t necessarily the best of times for him as he struggled to play in the system of then-manager Rafael Benitez.

But when footage of the goal was relayed to them by local publication The Chronicle, which appeared to bemoan the lack of form he showed at St. James&#8217; Park, it got many fans talking about his time at the club and why they could never really get the best out of him:

“Lost the trust of everyone early doors. Then wasn’t played enough. Watched an interview when at Partizan Belgrade and he said Newcastle was his favourite team. I think he should have played more for us.”

@dannycrozier
“We did, but it was just for his country as we did not play to his strengths at all. And also he barely played.”
@MikeJHop
“The reason we didn’t see it was because Rafa wouldn’t play him”
@andymason86
“Natural goalscorer and was a young lad when signed. Should have been given more of a chance as would hit double figures every season. Wilson aside Would you rather have him or Joelinton, Carroll AND Gayle??”
@ProudlockAndrew
“You could tell there was something there though – and more importantly; he cared. How many of the current crop could even part fill his boots?”
@SteveCorbett64
“Plays his best football when on international duty.”
@supersonicmike

Would you call Aleksandar Mitrovic a cult hero at Newcastle? 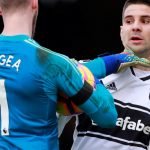 Yes, I think he is

With his current club Fulham set to battle with Newcastle United on the final day of the season, the narrative that he could ‘come back to haunt them’ will almost certainly be prominent in the build-up to the game.