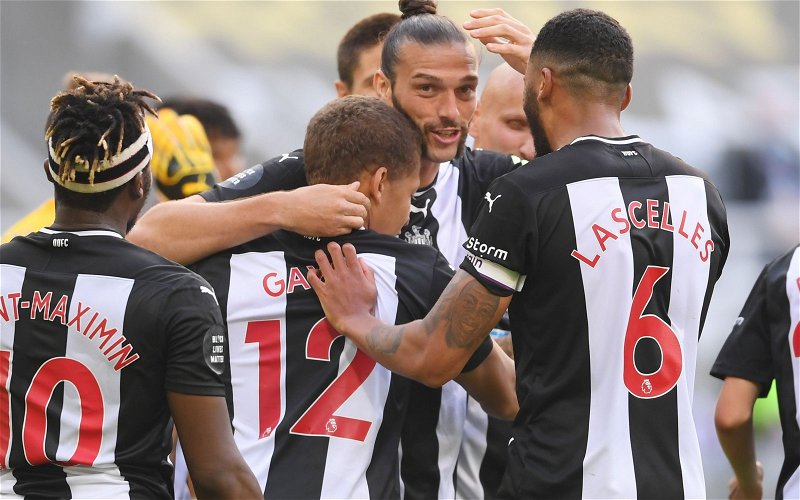 Lee Ryder has been speaking on the latest edition of the Everything is Black & White podcast about all things Newcastle United after the Toon drew 0-0 with West Bromwich Albion.

The Toon were absolutely dreadful in the game against the Baggies, and manager Steve Bruce seemed pleased to have left the Hawthorns with a point.

Fulham then beat Liverpool to cut the gap to one point, so the Newcastle result looked even worse than it was because of that win for Scott Parker’s men.

One topic that came up during the podcast was Bruce’s reasons for not starting either Andy Carroll or Dwight Gayle.

Ryder said: (3:08) “It was a strange one. He said that basically, if they had decided to start with Carroll and Gayle, they would have had to change the system entirely.

“It’s a strange one because you would think that Dwight Gayle is capable of playing where [Joe] Willock was in the first half.

“Andy Carroll, I get a little bit more because he is more of a target man, but then to throw him on in the dying stages, I didn’t see the point of that at all.

“If they were hoping to nick it, then maybe with 10/15 minutes to go throw him on.

“It was just a strange end to the game, and had Newcastle conceded from the free-kick which Andy Carroll conceded; it would have been an absolute nightmare.”

Did Bruce gets this wrong?

Yes, one or both should have played

No, we were just unlucky

Bruce seems to be suggesting that he couldn’t have played Carroll or Gayle because the system would have needed changing. Surely, they could have been working on this in training in the week rather than having three days off?

It just seems odd that a player like Gayle, who has an average Premier League goalscoring record, but better than Joelinton’s and Ryan Fraser’s, was not picked to start a winnable game.

Instead, he came on as a substitute and struggled to get into the match while Carroll was brought on right at the end to seemingly waste time.

It is no wonder Ryder is baffled by Bruce’s comments and the decision not to start either Gayle or Carroll.