Liverpool: James Pearce believes club could move on from Divock Origi this summer

The Athletic’s James Pearce believes that Divock Origi’s place in the squad could be under threat during this summer’s transfer window.

The Belgian forward has found game time hard to come by this season, making only 16 appearances in all competitions, of which six of them were starts.

Origi, valued at £14.4m on Transfermarkt, has forged a career for himself as being Liverpool’s go-to man either late in games or when the main forwards were unavailable, but just hasn’t been able to keep that form up this season, partly perhaps due to the emergence of players like Diogo Jota before his injury.

And speaking on the latest edition of the Red Agenda podcast, Pearce, whilst talking about Liverpool’s plans for the summer, insisted that the club are likely to look for someone who can provide a better option for them to come off the bench.

He said: “Well, I think there’s an acceptance there will be changes in that striking department this summer. I’d be amazed if Divock Origi was still at Liverpool next season.

“I think they will have to upgrade Origi this summer, regardless; getting Jota back fit will be massive for the coming months in terms of finishing this season off brightly.

“I still think they need another goalscorer, another high-calibre option up there, because [Roberto] Firmino has struggled this season, he hasn’t been able to have the rotation that he probably has needed because of Jota being out for three months.

“And also, I think Klopp knows that when he looks at that bench and he sees Origi that he hasn’t really got someone in Origi anymore who can come on and really impact a game positively.”

Is it time for Divock Origi to leave the club? 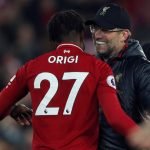 Pearce is right when it comes to his assessment of the situation. If we are to assume that the Liverpool front three of Sadio Mane, Roberto Firmino and Mohamed Salah remains, then the likelihood is that Jota will be the next man up to either come off the bench or replace one of them if they are injured or suspended.

This leaves Origi realistically fighting it out with Takumi Minamino to be fifth-choice. So with the Belgian being in the prime of his career at the age of 25, it does make sense to cash in on him now when he’s still got some value, invest that in the rest of the squad, and let him carry on his career elsewhere.