One of the topics that he spent some time on was Illan Meslier, who was in superb form against Fulham before the international break, facing six shots on target and earning an 8/10 rating from the Yorkshire Post.

One save in particular from Josh Maja was very impressive, and Hay spent some time praising the 21-year-old.

He said: (15:56) “It was ridiculous [save from Maja] and he’s pulled off quite a few like that, which I think is the sort of thing that marks him out as massive goalkeeping talent.

“He’s so young that there are parts of his game which are going to have to improve, aerially particularly, I think that’s quite apparent to everybody, but he is only 21.

Do you think Meslier has vast potential?

Yes, he could be amazing 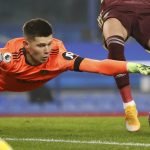 The Frenchman was given his chance by Marcelo Bielsa in the first team last season after Kiko Casilla was banned, and he hasn’t looked back as he has played 28 league games this season.

He has turned in some poor performances, but he has also turned in some very strong displays, and given that he is only 21, the future looks very bright for Meslier, and it is clear to see that Hay is a big fan.

Leeds signed the 21-year-old for only £5.85m last summer after his initial loan spell, and we think that price looks a bargain considering his performances so far.

We will be intrigued to see how Meslier performs in the rest of the season as Leeds aim to finish as high as they can.

In other news: ‘He’s a player I would go for’ – Phil Hay tells Leeds to sign ‘extremely talented’ 25-year-old