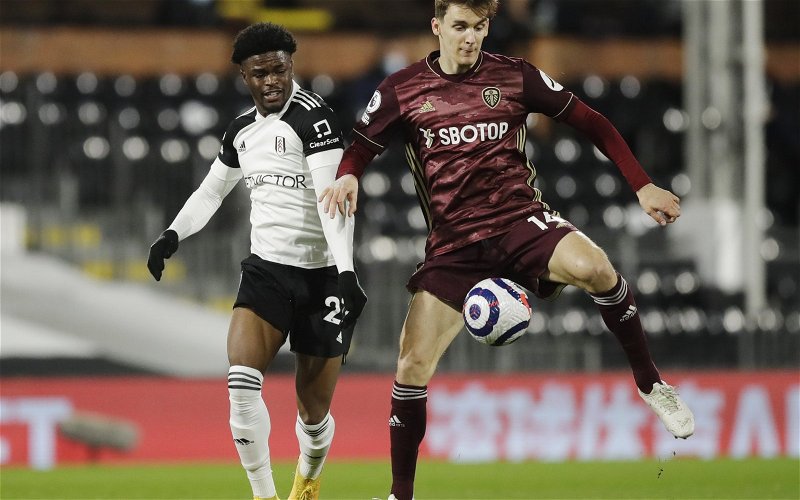 Leeds United fans on Twitter have been sharing their praise for Whites defender Diego Llorente and his latest performance for the Yorkshire club during their recent 2-1 win over Fulham in the Premier League.

This post then gathered a lot of replies from Leeds fans who were quick to share their thoughts on the Spaniard’s display at Craven Cottage.

So, what did these Leeds fans have to say about Llorente’s performance against Fulham?

“This guys the real deal”

“He is becoming stellar!”

“He looks solid and classy, a bit worried about his shirt grabbing obsession, hopefully it will be coached out of him before it costs us.”

“Perfect Ben White replacement. His forward passes really are something. Twice now his set up Bamford with 2 death passes. @diego_2llorente has been worth the wait & a top player.“

“He’s been superb. Love the way he gets his head up and calmly threads the ball through the lines and gets the attack going. I still think that we don’t need another DM to cover Phillips we already have one in Llorente. He reads game well and good on ball.”

Looking at the replies to this post, it’s clear to see that these Leeds fans were very happy with what they saw from Llorente in the win against Scott Parker’s side.

Were you impressed by Diego Llorente's performance against Fulham?

Given how Leeds Live gave the defender a match rating of 7/10 for his performance and said that he “took Josh Maja out of the game and forced him off at the break,” and that he is “reading the game so well and acting on it,” as well as being “assertive in breaking out from the backline too,” this shows just why these supporters were so full of praise for him on this occasion.

Moving forward, these Leeds fans and everyone else at the club will undoubtedly be hoping that the 27-year-old can replicate this type of performance throughout the remainder of the season.