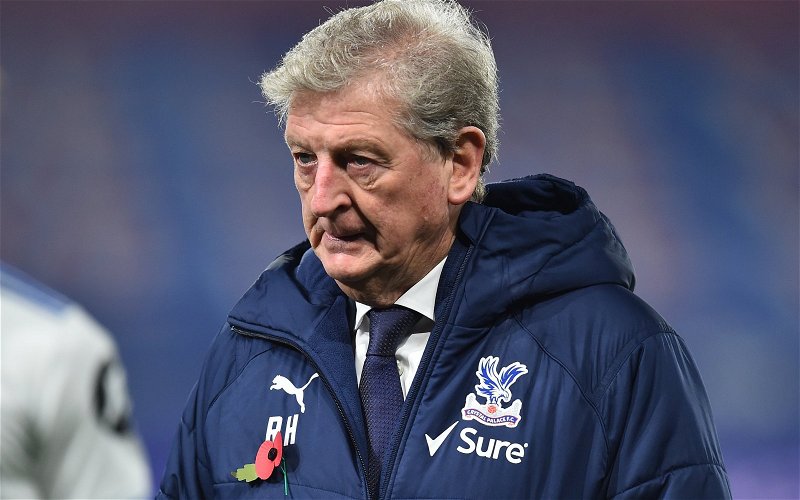 Alex Stewart has been speaking on the latest episode of the TIFO football podcast where he discussed the struggles Crystal Palace could face if Roy Hodgson departs this summer.

The 73-year-old manager has been in charge of the South London side since 2017, but his current contract expires in a few month’s time, and there has been speculation that the former England boss could be let go by the Eagles hierarchy.

Hodgson has often come under criticism throughout his time with the capital club for their style of play. Palace have often relied upon Wilfried Zaha for goals and excitement while favouring a more practical approach to games under his stewardship.

That has led to certain sections of the club’s supporters calling for Hodgson to go at the end of the season, however, Stewart believes that decision would be fraught with danger.

He said: (42:27) “It’s really difficult. And it’s, it’s difficult because there’s a time lag isn’t there if you bring in a manager who wants to play a really different style of football and the last time Palace did this, they brought in (Frank) De Boer; and that went horrifically badly.

“But you inherit a playing squad that’s been built by another manager with a different style of play, and so you either have to get that playing squad to start doing things very differently, or you have to transition that playing squad quickly enough that the style of football changes successfully, but not so quickly that you start with a new starting 11 because that doesn’t work either. So it’s incredibly hard to do.

“When (Tony) Pulis left Stoke, and they started to transition Mark Hughes, he was actually given quite a lot of time, and quite a lot of transfer budget, to build that transition. But even then, it wasn’t that successful. The only one I can think of that’s really worked that well has been Leicester where they were they went from sort of, you know, the very counter-attacking style of (Claudio) Ranieri, and they’ve segwayed to Brendan Rodgers’ style. But it’s even that is, you know, that’s taken a long time and a lot of transition.”

Hodgson has steadied the ship admirably at Selhurst Park during his tenure, but you get the feeling he may have taken Palace as far as he can.

The Eagles have a raft of players coming to the end of their contracts with the club, and it could be the perfect time to bring in a new manager with a different set of principles.

Having said that, it may not be the easiest summer to conduct major surgery on the first-team squad, due to the financial restrictions caused by the coronavirus pandemic, so the Palace board must think long and hard before making a final decision on Hodgson’s future.