Aston Villa podcaster Andy Bates has been sharing his thoughts on a possible return to Villa Park for Chelsea striker Tammy Abraham in the future.

This comes after Bates recently hosted the latest episode of Villa-themed podcast Gather ‘Round The Lamp where he spoke about a variety of topics concerning the club.

On the subject of Villa potentially targeting a striker in the upcoming summer transfer window, Bates had this to say on the possibility of Abraham, whose Chelsea future has been questioned, signing for the club he spent the 2018/19 season on loan at.

He said: “I think there’s been quite a lot of transfer talk, and I think it might be a little bit early for transfer talk just yet, but there’s always rumours around Tammy Abraham, of course, and he’s one of those promotion heroes.

“I still feel, personally, that he’s part of the club, that he’s there somewhere in the club and he’s obviously etched his name into the history of the club by scoring all those goals and breaking that record that was there for so long.

“But there’s obviously the talk of ‘well, if Tammy Abraham was to come in, then what does that mean for Ollie Watkins?’ and vice versa. Does Tammy Abraham want to be in a position where he might not be the first choice?

“I think he would be the first choice if he came in.”

During his season at Villa Park, Abraham made 40 appearances, in which he managed to score 26 goals and provide three assists along the way (per Transfermarkt).

Last season, the 23-year-old, who is currently valued at £36 million,  made 34 appearances for Chelsea in the Premier League, scoring 15 goals and providing four assists.

Given how many goals Abraham managed to score during his loan spell at Villa, it’s understandable why Bates would be happy to see the striker potentially make a move back to the club this summer.

Who would be Villa's first choice striker if they signed Abraham this summer? 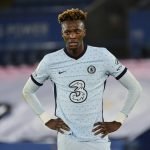 However, with Abraham having only managed to score six league goals so far this season from 20 appearances for Thomas Tuchel’s side compared to Ollie Watkins’ record of 10 goals from his first 26 league appearances for the club, it seems in our view that Watkins, in our view, should be Villa’s first-choice striker if Abraham were to return to Villa Park this summer.