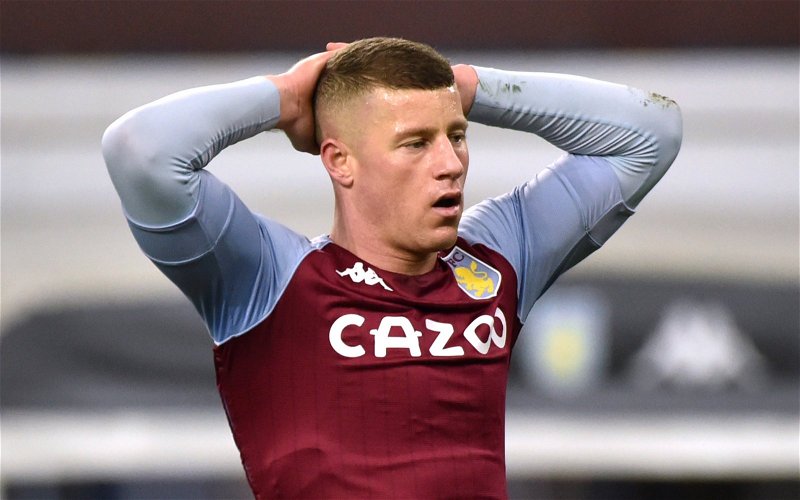 Aston Villa podcaster Simon O’Regan has been sharing his thoughts on Villa midfielder Ross Barkley and his current situation at the club.

This comes after O’Regan made an appearance on a recent episode of Villa-themed podcast Holtecast where he spoke about a number of topics concerning Dean Smith’s side, including their recent 2-0 defeat against Tottenham Hotspur in the Premier League.

On the subject of Barkley, who didn’t start the game against Jose Mourinho’s side but was brought on in the second half replacing Morgan Sanson after the hour mark, O’Regan had this to say about the Englishman and his recent run of form in a Villa shirt.

He said: “I think what’s sort of annoyed me as well over the last few weeks is Ross Barkley, and I’m not trying to single him out because I think he has been really heavily criticised more than he probably should have been, especially when other players haven’t exactly stepped up either.

“These last few weeks were a real opportunity I think for him to really shine and play his way into getting in a decent move and he hasn’t really done that.”

Barkley signed to Villa back in September on a season-long loan deal from fellow Premier League side Chelsea.

Since arriving at the club from Chelsea, the 27-year-old, who is currently valued at £18 million, has made 18 appearances for Villa in the Premier League in which he has scored three goals and provided one assist along the way (per Transfermarkt).

Given how Barkley has only made 20-minute cameos in Villa’s previous four Premier League games and has failed to provide an assist for his teammates or grab a goal himself shows that he has not been particularly impactful when he has come off the bench in recent weeks (per Transfermarkt).

Do you think Villa will want to sign Barkley on a permanent deal this summer?

Moving forward, Barkley now has the international break to work hard in training and try and force his way back into the starting XI where he may be able to have more a significant role in the team before his loan deal at Villa Park expires and a decision will need to be made about his future.