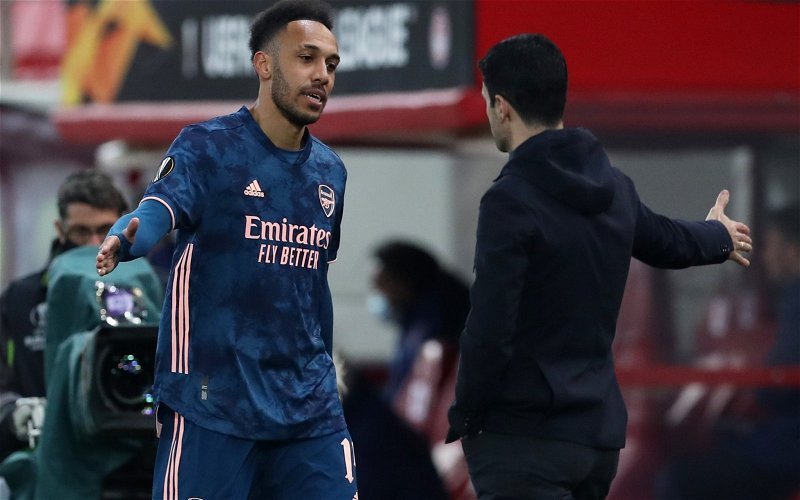 This comes after McNicholas recently made an appearance on the latest episode of The Ornstein & Chapman Podcast where he spoke about a number of topics concerning the north London club.

On the subject of Aubameyang’s relationship with Arteta – after the Arsenal manager recently dropped the striker from his team to face Tottenham Hotspur at the weekend due to disciplinary matters – McNicholas had this to say about whether or not the Arsenal fans should be concerned over the relationship between the pair.

He said: “I don’t think there’s any real reason for concern among the Arsenal fans.

“I think Arteta and Aubameyang generally have had a really positive relationship, and Arteta was kind of the key reason that Aubameyang chose to stay and extend his contract last summer.

“Now, this season for him hasn’t gone perhaps as he might have planned it, it’s not been ideal, but I hope from an Arsenal perspective what we get out of this is a very motivated Pierre-Emerick Aubameyang for some big games coming up.”

Arsenal signed Aubameyang back in the 2018 January transfer window from German club Borussia Dortmund for a fee of £57.38 million.

Since then, the 31-year-old, who is currently valued at £36 million, has made 138 appearances for the north London club, in which he has managed to score 84 goals and provide 16 assists in the process (per Transfermarkt).

TIF Thoughts on James McNicholas’ comments on Aubameyang and Arteta…

While Aubameyang will have undoubtedly been disappointed to lose his place in the team for the match against Spurs that saw Arsenal win 2-1 thanks to goals from Martin Odegaard and Alexandre Lacazette, he will have been happy to see his side beat their north London rivals.

Do you think there is a problem between Arteta and Aubameyang?

Moving forward, the striker will have to make sure he stays within the rules that Arteta clearly has at the club if he wants to earn back his place in the team.

However, given that Aubameyang has been one of Arsenal’s top scorers in the Premier League this season, it seems unlikely, in our view, that he will be out of the team for much longer.